In our globalised industrial societies, there is practically no human activity that does not give rise to greenhouse gas and CO2 emissions, whether directly or indirectly. Like it or not, the tiniest journey we make from one location to another, the smallest act of production or consumption will inevitably contribute to global warming and climate change. While every citizen on earth is invited to reduce the emissions they are responsible for and their ecological footprint by changing their lifestyle and daily habits, we all realise that the sum of these ‘small gestures’ on their own will never suffice to reverse the trend and – bearing in mind the 2015 Paris agreement based on the work of Giec – will not be able to limit global warming to the target figure of +1.5°C by the end of the century.

The closest we could get to this figure would require that by 2050 the world were to arrive at carbon neutrality, that is, as Giec would put it «the state by which the sum total of residual anthropic CO2 emissions are matched and counterbalanced by the same quantity of anthropic CO2 eliminations on the world scale» (Giec). This highly ambitious objective assumes widescale commitment to the target and mobilisation on a massive scale. Nation states, local authorities and, of course, businesses, would need to drastically reduce their Greenhouse gas emissions overall. It is in this context that in France, since 2012, all companies with more than 500 salaried staff have been obliged to complete a regulatory status report once every four years: this has turned out to be an invaluable resource and inspiration when it comes to laying the groundwork for an action plan to achieve carbon neutrality.

For a company or government authority, the principle of achieving carbon neutrality consists primarily of reducing the source of GHG emissions as far as possible. For all companies whose activities

, on-site interventions), the reduction of direct emissions is clearly the priority. While all the major transport and logistics players are already actively pursuing fleet renewal plans (for example, to introduce less polluting engines, powered by CNG or LNG, biofuels, electricity, hydrogen) to achieve carbon neutrality, there is also a pressing imperative for all companies

overall. This is of course just what GEOCONCEPT software is designed to do, through reducing the number of kilometers travelled, helping companies to:

… all this translating into reductions in costs that can be as much as 30%.

When transport is your core business, taking steps to reduce travel and energy consumption, and sourcing your business requirements with green energy already represents a huge step forward, but is generally not sufficient to achieve carbon neutrality. This is even more true for companies where transport and direct energy consumption only occupy a limited footprint in the value chain: these would typically be companies for which production is «dematerialised». This is the case for banks, insurance companies, and …. software publishers like GEOCONCEPT!

Any company set on achieving carbon neutrality, whatever the business sector, must be prepared to compensate by some other means for the emissions they cannot reduce directly. Carbon compensation is a mechanism by which any company can counterbalance its own CO2 emissions though the financing of external projects that contribute to a global reduction in Greenhouse gas emissions or carbon sequestration. Usually this consists of development projects in

, distribution of energy efficient equipment, agro-ecology and forest cover restoration. It is this last option that GEOCONCEPT has chosen, in committing its effort to support Reforest’Action.

A forest works against warming, but it’s so much more besides!

At planet scale, nearly 4 billion hectares of the earth is covered by forest: that’s 30% of the surface area of the globe. The world’s forests are the second largest natural source of carbon (second only to the oceans) and so play a vital role in climate regulation, helping to maintain ecological balances that are crucial to all forms of life. The devastating fires that can rage in the Amazonian forest and the intertropical African forests are a reminder of just how vulnerable these major and complex ecosystems are, and of the threat their possible destruction represents not just for CO2 capture, but also for hydrological regulation, the quality of the ground itself, and of course, biodiversity. Brush fires and forest fires currently ravaging Australia, at a time of drought and heat waves without precedent, dramatically illustrate the consequences that must surely follow when vegetation is put at risk through degradation on a vast scale.

A study by ETH Zürich, published in Science magazine in July 2019, estimates that a 25% increase in the number of trees in the world would enable a 25% reduction in CO2 concentrations in the atmosphere. The world population of trees is estimated at 3,000 billion, and we need to plant another 1,000 billion trees, which will in turn require 900 million hectares of ground: that’s an area approaching the surface area of the United States of America! For GIEX experts, while it is an absolute priority to plant new forests, the most important thing of all is that we stop destroying the ones we have. Protecting existing forests and restoring forest cover that has been damaged or eroded comes at the top of the list!

This is the course of action we at GEOCONCEPT have chosen, in deciding to support the reforestation project in the High Peruvian Amazon, and the San Martin region.

«Our forest» in Peru

The project we are involved in fights against the rapid deforestation taking place in the San Martin region. It aims to restore forest plots and develop agroforestry by planting a variety of local tree species, selected according to the area’s precise soil and climate conditions and the needs of the local population.

We have already planted 2000 trees! 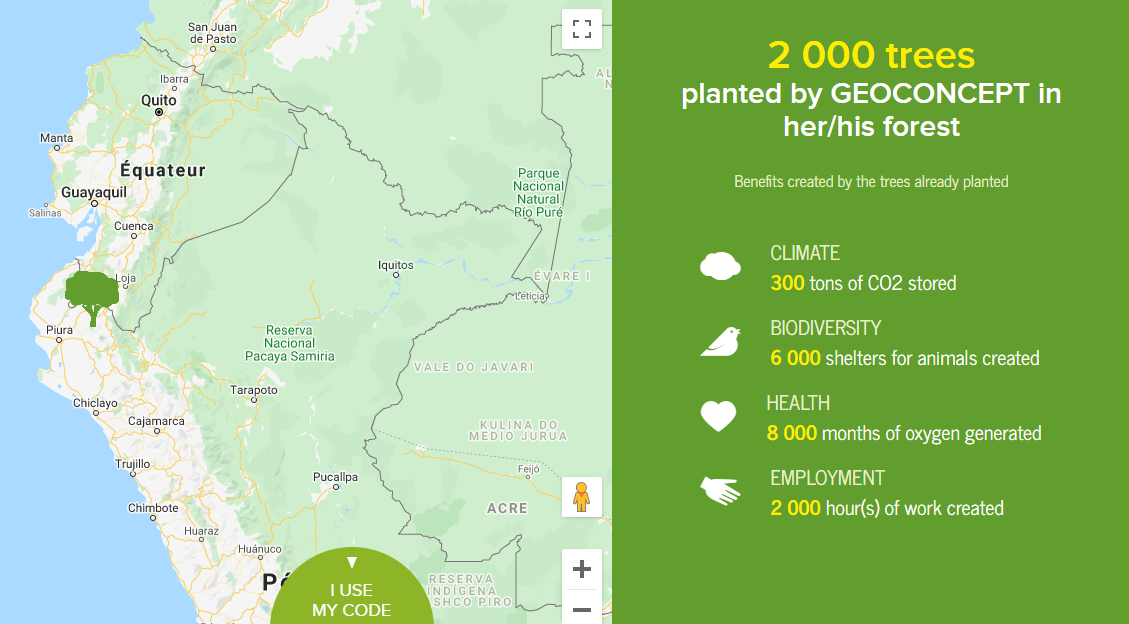 And we mean to carry on!

To celebrate the New Year and bring our customers and partners together in a shared commitment to this worthwhile project GEOCONCEPT invites YOU the customer or partner to join us in our endeavour to match every New Year’s greeting we make with the gift to the world of a tree… in other words, «1 season’s greeting card = 1 tree planted».

So, if you have received a GEOCONCEPT greetings card, all you need to do now is visit the Reforest’Action website and enter the code printed on your card (in the window at the bottom of the page).

And that’s all there is to it! You must admit, for a good cause, that’s designed to work for the benefit long term of our planet, its climate, biodiversity and local populations, it’s not a lot to ask!

So get the year off to a great start: Use your code!

Geomarketing: optimize your business and marketing...