The relaunch of rail freight is a topical issue. But the train cannot offer a solution for the problem of the last mile, the most costly and polluting link in the logistics chain…

On 27 July 2020, the Prime Minister announced a plan to stimulate rail freight, and unveiled several pilot initiatives: for example, toll-free tracks for goods trains up until the end of the year; halving current prices for these tolls by 2021; priority development of ‘rail motorways’ such as Bayonne-Cherbourg, Sète-Calais and Perpignon-Rungis, the last of these intended on completion to form part of a line from Anvers to Barcelona. The drive to restore the position of rail transport in French logistics is there for everyone to see. But the ambition to double rail freight as a proportion of goods transport overall by 2030, justified by the pressing nature of

, has consistently been foiled by punitive taxation, so far have we yet to go in this area.

Rail freight today represents 9% of all goods transportation in France. Doubling this proportion over 10 years would bring France back up to the current European average (18%). But when you discover that the European Commission’s target is to increase the share of rail freight to 30% by 2030, France with its figure of 18% would still not qualify as one of the ‘good boys’. It’s useful to remember that the current average hides some huge variations between countries: rail freight shares range from 75% in Latvia to 0% in less well-off nations such as Malta and Cyprus. In Germany, which bears comparison with France to a greater extent than these ‘small countries’, the share of rail freight is 18%, with its decline in relation to road freight having been swiftly reversed by stimulus packages rolled out from 2013 onwards. Rail freight shares for Austria and Switzerland – countries that have been implementing similar measures for combined accompanied transport (‘piggyback’ transport) for several decades now - are respectively 32% and 35%. 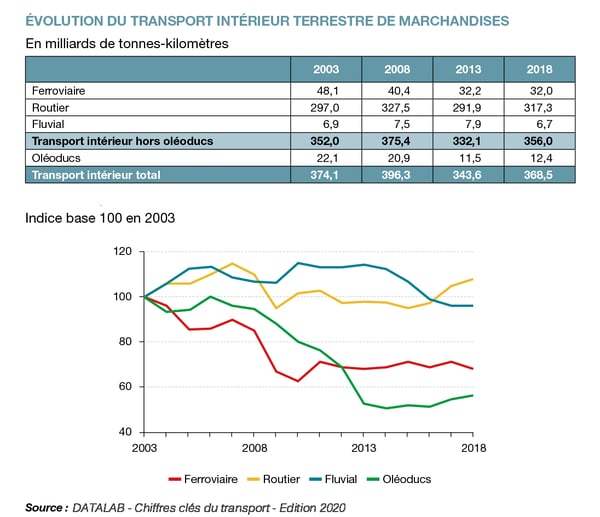 Articles published on the subject of government initiatives offer more or less the same explanation: rail freight has been constantly on the decline – over the last 30, or even 40, years – political priority has systematically been given on the one hand to profitable ‘traveller’ links (TGV) and, on the other, to road transport networks (motorways). The result? Chronic under-investment in freight; too few, ageing and ultimately not very reliable infrastructures; and an operating environment that is all but prohibitive for operators and loaders, with continual delays in the movement of freight due to priority being allocated elsewhere, so leaving the track time allocated to freight unguarded, and vulnerable to being eroded over time to the benefit of passenger services.

As neither reliability nor punctuality are the order of the day on the French railway, road networks have, inevitably, appropriated the lion’s share of the freight ‘pie’, and the more so given the great flexibility afforded by lorry transport, aided and abetted by the fierce competition between transporters that brings prices down. As these trends were visibly unaffected by two government stimulus packages, it is understandable that the recent announcements would be received with a certain scepticism on the part of sector players.

As things stand, road transport appears to be more competitive than rail for transporting most goods. This remains true, in France as everywhere else, provided weightings for social and ecological parameter calculations are not included in the calculation. So long as the European framework continues to prohibit any obstacle to free market competition, the social dumping that reigns in road transport is not about to disappear. What’s left? The ecology argument, that gives rail a significant advantage over everything else, as much for freight as for passenger transport.

Whether it is in terms of energy consumption or greenhouse gas and pollutant emissions, the net effect in ecological terms for rail freight is incontestably much more satisfactory than that of road transport. Taking all modes of transport together, freight transport consumes approximately 16 Mtep/year, with more than 97% of this being diesel because of the predominance of heavy goods vehicles and thermic engines. This energy consumption generates 44 MtCO2eq/year, that’s about 9% of France’s total CO2 emissions (excluding overseas territories). Heavy goods vehicles and light utilities account for 50% and 48% respectively within this total, and rail transport only 1% (Source The Shift Project/Datalab).

In their report submitted to the government on 25th June 2020, the 4F Alliance, the French rail freight federation, estimated that doubling rail capacity and use would reduce CO2 emissions by 8 million tons per annum by the year 2030. If we start from the principle that just one goods train would relieve the road network of about 40 vehicles, the net positive effect on economic efficiency and traffic congestion of a seismic shift over to rail transport would be dramatic, and extremely rapid. "France would also be meeting its obligations to tackle global warming in line with the Paris Agreement, the European Green Deal and the proposals of the Citizen’s Convention for the Climate." 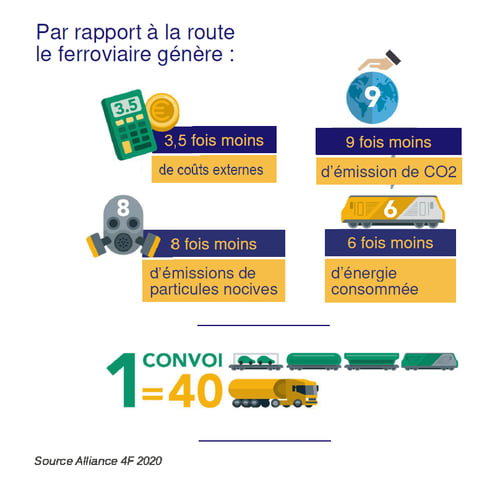 Rail for which types of freight, and to take it where?

In view of these data, switching a proportion of road freight over to rail really does seem an eminently desirable solution, as much to reduce fossil fuel consumption as CO2 emissions. Unfortunately, this cannot be achieved in the twinkling of an eye! On the one hand, the level of investment needed would be considerable, and spread out over time, and on the other, rail transport is not suited to all goods categories. Finally, as much as everyone agrees on the complementarity of the different modes of transport, road transport players will obviously be making sure they defend their interests…

Is this what’s behind assertions such as the following from road transport professional Luc Nadal, CEO of GECO (1)? “Rail transport has a future for the transport of large quantities of bulky, heavy merchandise. It is well suited to scenarios where combined transport solutions can operate over the major axes of travel, where one can be certain to fill the train in both directions. But let’s not leave the community at large in France labouring under the illusion that rail transport will be able to reclaim market share from the road. Under current conditions, there is no way for this to happen. Give rail transport the space it needs to become truly competitive: bulk collection of containers from ships arriving at our ports, transporting cereals from Beauce to the ports… rail is clearly the ideal solution here. But for everywhere else, we need to find solutions that take advantage of our exceptional motorway network, and of course, make road transport clean and secure.

In other words, the train would only be a viable option for goods destined for export departing from major agricultural or industrial production centres, or goods in transit via this country. This vision is difficult to reconcile with the European objective to bring the rail freight share up to 30% by 2030, even taking into account the movement being led by 4F, from which the government initiative largely draws its inspiration. This predicts in effect a tripling of combined road-rail transport (21.2% of today’s rail freight) and a 50% increase in conventional freight transport (that is, non-container freight or goods carried in road vehicles as cargo aboard trains). This amounts to admitting that without carbon taxes on road transporters, or massive funding in support of rail, road transport has a good chance of remaining the king of the route for all goods that need distributing throughout the territory. This concerns especially goods and products destined for the retail distribution chain and, with the explosion of e-commerce, the individual consumer.

Trains will never be able to deliver the last mile…

Since it is inconceivable that we could unreservedly multiply infrastructures for transferring freight from rail to road, and put a stop to freight convoys wherever possible, routing towards distribution points or end customers will necessarily be by road, via multi-modal platforms supplying metropolitan areas or regions in the major conglomerations. This assumes we can adequately

so that road transport is reserved for the last 200-300 kilometres, and this traffic still has to be compliant with low emission zone (LEZ) regulation and urban logistics planning schemes being deployed by a growing number of administrations.

If we want to avoid placing too much emphasis on local logistics infrastructures (urban distribution centres, urban warehouses and depots…) and enforce more limited access to hyper-centres for thermic vehicles, authorities and transporters will more than ever have to depend on technological solutions to:

These are the highly demanding conditions – in terms of investment, but also in terms of the collaboration and information sharing required between players involved – for a revival of rail freight to the benefit of last mile logistics, the battle to reduce the global carbon footprint of freight, and the emergence of a transport system that is equal to the

we face this century. 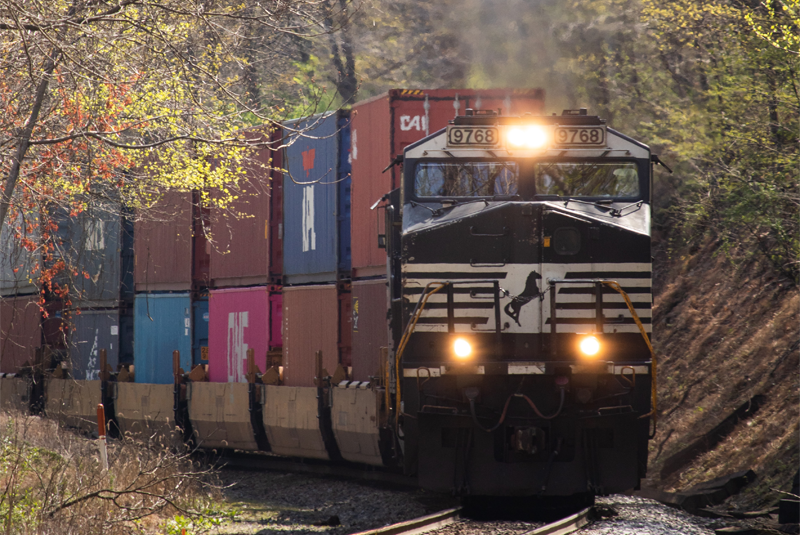 Harness the optimization of mobility to your CSR g...

Appointment booking – how about leaving this to yo...

Can we put a stop to empty freight?